I’ve been listening in on and checking into the NTTN (Northwest Oregon Traffic and Training Net) net for quite some time. Just recently, I sent my first radiogram! I’m a net control operator for the NET net here in Portland, and decided that I’d talk about NTS and traffic handling during one of my sessions. NET doesn’t use NTS radiograms, but I still think there’s a lot of valuable experience to be gained from participating in NTS that will directly apply to NET deployments.

I’d been listening for a long time, but was nervous about volunteering to handle traffic, and nervous about trying to originate my own traffic. What do I do with traffic I’ve handled? How does it get from me to the person who it’s destined for, assuming it’s traffic bound for a local person and I’d be taking it the “last mile” to the person. As far as originating traffic, what sort of traffic is appropriate? NTS is “formal” traffic handling, but does that mean it can only be used for formal messages or can I say hi to a friend across the country for grins?

I asked Michael AE7XP what his thoughts on the matter were, and he suggested I ask the net control of the NTTN some night, that it could be an interesting discussion and they’d have better answers for me anyways. So, this Friday, I did just that.

And I got answers! It wasn’t the lively discussion Michael was suggesting it might be, but I at least became much more comfortable with the idea of participating in the net in a larger capacity than just checking in every now and then.

For last mile handling, generally it’s a phone call. I found a good script for this here. If you have the email address of the recipient, an email works. Or sometimes they are sent as postcards. I remember getting my “Greetings from amateur radio” postcard back in the day when I first got my license.

Now, the irony of using email or a postcard for last mile delivery of a radiogram is not at all lost on me. If you send someone an email, chances are good there will be a fairly significant amount of internet traffic generated to originate, process, deliver, and store the email, much of which will cross the country if not the world, involving many round trips of TCP packets and whatnot. I mean, in a world where I can stand next to some train tracks in Japan out in the countryside and make a video call to a friend who is currently on a train in a tunnel at the bottom of the San Francisco Bay so he can watch a train go blowing past me at 300kph, in real time, what’s the point of NTS anyways? But I digress (and I’ll address some of that during the net, and probably a post here in the future).

As far as originating traffic is concerned, it seemed like pretty much anything was fair game. Obviously it has to be compliant with FCC part 97 etc etc, and don’t use it for passing information about the death of a person or other very private sort of thing, but say hi to a friend across the country? Sure! That’s why there’s a precedence in the radiogram anyways! Plus, it’s all practice, and practice is good (and is one of the reasons NTS is still valuable).

So after I asked my questions and got my answers, I said “in that case, KT7CAT with traffic” (my call sign changed to K1CHN the following day). Net control called out for volunteers, KC7ZZB took on the challenge, and I relayed to him my number one, a short greeting and well wishes to WR0U, the first ham I ever met, who lived 2 houses away from me during my high school years. Given the call sign change, it’s a crapshoot whether or not his reply (if he replies) will come back to me, but we’ll see! I also got some compliments on “that was a good number one” etc. I think because I read things out slowly enough, had the protocol down, etc. Or maybe just general words of encouragement, who knows! Felt good, anyways! 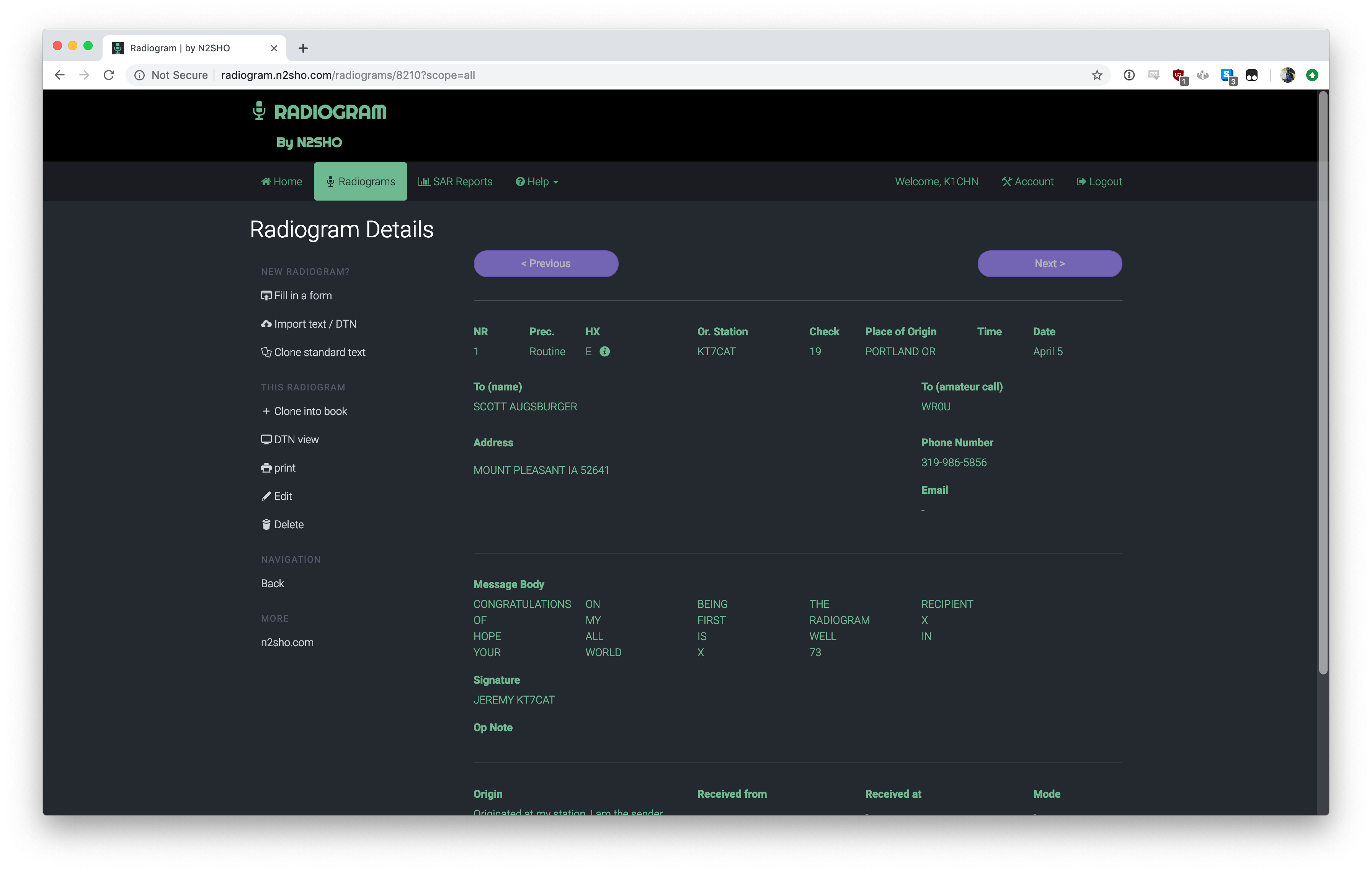 As part of this process of exploring this aspect of amateur radio, I came across a site where one can manage their radiograms, ones they’ve originated, handled, or been the recipient of, and not only has the prospect of putting it to use gotten me more interested in traffic handling as a whole, it has inspired me to work on a web application of my own for some ham radio things. The site, I just call it “radiograms” by N2SHO, is pretty cool. I’ve been using it to practice copying traffic that other people are handling, including book traffic (though it could use a slightly different flow for book traffic than it has, methinks), and I used it to compose and now track my #1 radiogram, and hopefully more in the future!

All in all it was a good time, and I’m glad I finally spoke up and asked my questions that had been burning in the back of my mind for so long. This was my first radiogram, but I hope it won’t be my last. Tomorrow before the NET net, I hope to handle some traffic myself, if for no other reason than so I can talk more about it during the net afterward! Should be interesting, if nothing else!